A Mother’s Diet Before Conception May Affect Baby’s DNA 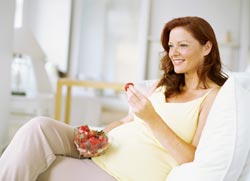 It’s a well-known fact that a mother’s diet during the course of her pregnancy has a huge impact on the formation of the little one growing inside of her. However, NPR reports that new research shows a mother’s diet before she conceives plays as much a role, making pre-conception care the key to giving birth to a healthy child.

A study published in the journal Nature Communications  looked at the dietary intake of 30 non-pregnant women who all lived in the same village in Gambia. They followed these women for the course of a full year to determine which substances and nutrients they generally took in over that time frame, noting that these changed based on the seasons and the availability of certain foods.

What they found is that the mother’s dietary intake at the time of conception did affect how DNA was expressed. This means that what a mother eats up until she becomes pregnant greatly influences her child’s biological foundation.

They also noted that the mother’s BMI, or Body Mass Index, during the course of the study. As it turns out, even though the women involved were all of normal weight, their BMI directly correlated with specific markers in their infant’s DNA, again confirming the amount of impact a mother’s health has on her unborn child. These findings confirm results found in tests with lab mice, which showed that a female mouse’s weight and diet at the time of conception affected her offsprings’ DNA.

In addition to having proper nutrition, part of being healthy involves engaging in regular chiropractic visits, long before you even try to conceive. Your body’s health today impacts your baby’s health tomorrow, so take care of yourself now so that you can give your little pride and joy the best chance possible for years to come.

Chiropractors can provide natural pain relief during pregnancy, in addition to supporting you in making healthy lifestyle choices during this crucial time. There’s a reason why pregnant women treated by a chiropractor report  high levels of satisfaction with their care, with 85% are relieved of their back pain after chiropractic.