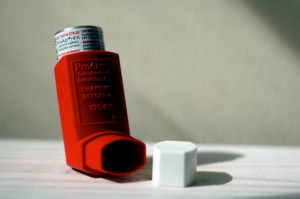 Is vitamin D the magical supplement for chronic inflammatory diseases? In the case of asthma, a new study says “no.” But there are reasons to assume the study didn’t examine the whole picture.

In this new study performed at 19 different hospitals in the U.S., patients were supplemented with 100,000 IU vitamin D once, and then 4000 IU daily for 28 weeks. The researchers reported that the level of supplementation raised vitamin D levels of patients who were deficient to the amount considered adequate in the study (41 ud/dl). However there were no significant effects on lung function or asthma symptoms. Asthma control and quality of life did not improve as a result of the added vitamin D. They concluded that vitamin D supplementation is not recommended as an adjunct therapy for adult asthma sufferers.

There are a few things to consider before everyone jumps to the same conclusion. Interestingly there’s a discrepancy between the dosage of vitamin D that the researchers used compared to the current medical protocols. The dosage in the study may have brought levels up to ‘normal’, but medical protocols to overcome a deficiency use levels of  50,000 IU per week for three entire months, delivering 600,000 IU in 12 weeks. The researchers only administered 320,000 IU in the first 12 weeks — almost half of the recommended amount.

Although the patients’ vitamin D levels rose from deficiency to within the normal range, and their levels were deemed adequate during week 12 to 28, it’s possible that the amount of time they were ‘adequate’ may not have been long enough to affect their asthma.

Next, there’s a current debate about where acceptable vitamin D levels should fall in the range of 0-100 ug/dl. Joseph Mercola, D.O. and other top health-care experts as well as vitamin D researchers report that 50 to 80 ug/dl is a much more realistic goal for everyone. Yet the researchers used 41 ug/dl as their standard.  This level is above the level of accepted standard of 30 ug/dl for medicine but it’s nowhere near the realistic goal.

Another point to consider is that there is no evidence to suggest that an oral dosage of 100,000 IU vitamin D is even absorbed in the body. Nutrients are absorbed in much smaller amounts, and it’s questionable whether or not a huge amount could be absorbed and utilized in the body. This is why practitioners only prescribe up to 5000 to 10,000 IU daily, or use one injection of 50,000 IU vitamin D per week. The study results may simply show that the dosage used was not effective.

The most interesting part of the study comes from this quote in their research: “Each 10-ng/mL increase in serum 25-hydroxyvitamin D level was associated with a reduction in the overall rate of treatment failures and overall rate of exacerbations.” So even though there were no major reductions in quality of life and asthma symptoms, it does appear that the researchers were on the right track. The results shows we need better studies matching realistic therapeutic protocols with research.

And let’s take a more holistic view of the disorder. There’s a positive influence on asthma with chiropractic manipulation; chiropractors have known this for decades. It’s entirely possible that in order to improve, asthma may need the additional nervous system input that is delivered from manual adjustments. Perhaps the puzzle of disease can only be solved when the nervous system integration is a part of the solution.

Photo by NIAD via Creative Commons